Paragliding is the recreational adventure sport for paragliders that soars often to altitudes of a few kilometers above the ground level. It is light weight, free flying, foot launched glider aircraft which has no rigid primary structure and it doesn’t use engine for soaring. Para glider flights can last for a few hours and fly high hundreds of kilometers above the ground level.

There is a harness below a fabric wing that makes the paraglider comfortable while soaring high above the ground. The air pressure enters the vents in the front of the wing and the dynamic force of the air flowing over the outside balances the atmospheric air present in the harness.

Paragliding relates to other activities like hang gliding, powered gliding and speed riding. Hang gliding offers pleasures and thrill to the paragliders with only a little difference in equipment as compared to paragliding. This is non motorised and foot launched wing that gives a strong grip to the glider. It has a hanging that is suspended by the harness from a large type of kite. Powered paragliding is the flying of paragliders with a small engine that is located to the flight. Speed riding or speed flying is a separate sport of flying paragliders of a lesser size. In it, the wings have increased speed, though they are not capable of soaring at a higher level. This involves flying on skis or on foot and gliding rapidly down to a slope, touching it if skis are used.

Paragliding is an adventure thriller that draws thousands of enthusiasts and adventure geeks. There are perfect paragliding locations throughout the world. One such attractive location is Bir that is considered as the second best site after Lake Como in Italy. Experienced pilots might take a solo flight or carry their own gliders but for beginners there are skilled instructors who guide you to soar above in a two seated glider. This is the best experience with minimal risk and full thrill blended together. 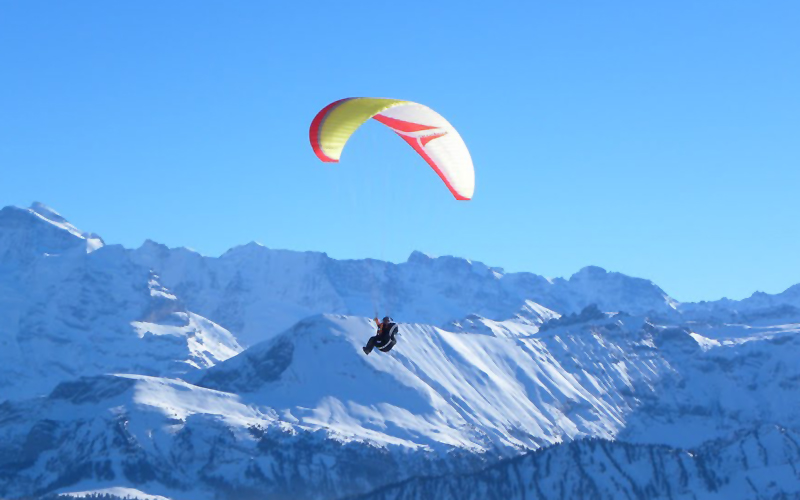 Paragliding provides with full thrill and joy for a lifetime experience, still it is considered to be a dangerous sport that involves significant risks. Hence, it is advised to fly in good weather with no signs of clouds, to be very alert and not to fly if sick or exhausted. You need to locate the electricity wires when landing down, parachute needs to be deployed whenever needed.

In India, paragliding sports take place in many places majorly in the state of Himachal Pradesh with a huge density of tourists visiting the sites during every season. Along with paragliding, there is trekking and camping that together sets in an adventure mood. These activities take place during any time of the year increasing your adrenaline rush.

Himachal Pradesh had hosted the para gliding pre World Cup for the year 2013, and now it is gearing up to host for the 2015 para gliding World Cup. The tournament is to be organized under the aegis of Paragliding World Cup Association of France. This is the first paragliding World Cup that is being organized in India. The tournament will be held from October 24, 2015 in Kangra district with a number of pilots competing each other.  There would also be a live tracking system during the event, to ensure safety of the pilots and this would again help in rescue operations in case of any kind of emergency. The event would surely create interest and enthusiasm with the spirit of sport among adventure buffoons.

Pack your bags and move ahead towards any place that provides such vigorous activities. Always remember safety is the deterrent of adventurous sports, therefore begin your journey with keeping safety in mind and carry products that would be required in your journey or in the entire trip.

India shines at the Rio Paralympics 2016