She had heard about it. She had seen it become the topic of curiosity and much debate among her friends. She gazed at herself in the mirror with wide open eyes as she furiously tried to clean the blood stain on her school dress. It was still just an hour past the lunch break and she still had three more hours of school left. She was initially a little flustered and scared hoping with all her heart that she wasn’t dying. What would her friends say? She had blood stains again on the back of her pinafore by now. She hurried past the corridors and ran to the matron. The matron was a curt old lady. On seeing the young girls anxious eyes full of questions, she couldn’t help smiling to herself.
The matron gave her an alien looking object which she explained was a sanitary napkin and asked her to look up “menstruation” once she was home. Her legs were aching and her head was throbbing as she walked back to her dormitory. The first thing she did once she was back was to look up “menstruation”. She wanted to call her mom whom she suddenly seemed to miss a lot. She sifted through a number of webpages but they all seemed to be written in Hebrew. She wanted to talk to her mother or a doctor. Her eyes glimmered with tears on which suddenly she had no control. It was rare for her to cry. Why was she crying? She kept asking herself this question as she adjusted the uncomfortable sanitary napkins and cried herself to sleep.


She was a young woman of 20 now. She was tall, lean and beautiful. She was known to be calm and composed. She was considered to be lucky but only she knew the terror that she used to go through.
There were days. These days came every month when she just didn’t feel like herself. She was famous for her quiet demeanor and rarely seemed insecure or not confident. She was perplexed. Does she have an alter ego that comes alive for just a few days every month? An alter ego who cries or howls for the smallest of things! An alter ego who keeps over thinking and successfully manages to make her life a living hell! This alter ego of hers keeps sobbing, acting grumpy and manages to make her feel so insecure and insignificant at times. Should she go visit a psychiatrist?


What PMS, really? Is PMS even real? She thought it was a term coined to just make the ladies feel better. Who can she go to and ask if is this is actually real without making a complete fool out of herself? She wonders while her alter ego sobs uselessly as usual.
She is now a 29 year old expecting mother living in Bangalore away from her mother. She doesn’t know the kind of food she should have. Can she please have her favorite pizza with a coke? Will her child adjust with her for a day? Oh probably it’s all cool, maybe my kid will like the pizza too! She grins as she says this to herself while her husband is at his office. She feels terribly sick as she digs into her favorite double cheese pizza. She rings up her mother but she isn’t answering. Who can she seek help from in this unknown city? Suddenly big tears full of anxiety and helplessness glimmer on her double cheese pizza. She wishes she had a friend she could confide in. She opens a flashy new magazine and comes across an advertisement that reads “OoWomaniya”. She opens the website and suddenly sees the reflection of her on the dull screen smiling. 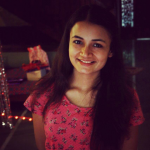